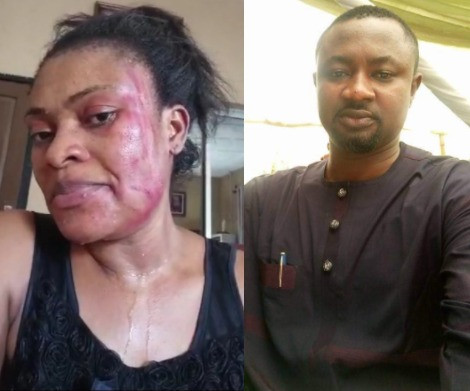 Dr. Ifeanyinwa Angbo is a medical doctor. She is married to Pius Angbo, a reporter with ChannelsTV, and they live in Owerri with their 4 children the youngest was born 4 weeks ago via a C-section.

On the 6th of December, a video went viral on Twitter of Dr. Angbo, with bruises on one side of her face, accusing her husband of domestic abuse. She states in the video that she has been married to Pius for 6 years, and during that period he has been sleeping around with other women. She gave birth to their 4th child some 4 weeks ago and told him to stop spending money on other women because they would need that money to train their children.

That was when the beating allegedly took place. She accused him of beating her, strangling her, and sitting on her incision the baby was delivered via C-section. She also claims that he did the same thing when she was about 3 months pregnant: beat her and sat on her stomach.

Dr. Angbo stated that she was calling out her husband and wanted justice for the abuse.

The video was shared on Twitter, with people mentioning ChannelsTV and using the hashtag #16DaysofActivism, as well as mentioning Twitter handles that lead campaigns against gender-based violence in Nigeria, to draw attention to these accusations.

ChannelsTV has since released a statement on Twitter saying the organization “does not condone violence against women or anyone in general.
The domestic violence matter reported against one of our reporters is being investigated and appropriate action will be taken”. (@channelstv)

Social media is outraged on behalf of Dr. Angbo and would desire for justice to take its course in the matter.

CRAWYC will report on updates as the matter unfolds.